While Darth Vader was one of the most gifted Force users in Star Wars lore, it was only once he shed the Jedi persona of Anakin Skywalker that he became a true force of nature. This is because while the Jedi fighting style has produced many skilled warriors, it took the Sith way to unlock Vader’s true power, with devastating techniques that he could only embrace by forgetting his tutelage at the hands of Obi-Wan Kenobi.

While Darth Vader was an accomplished lightsaber wielder, his true strength was in his ability to control the battlefield through the Force. Fighting Vader was like fighting a tornado, as everything around him became a weapon. Luke Skywalker even noted that Yoda’s training was insufficient in his first fight against Vader, as while the Jedi master had taught him how to counter a lightsaber, that was just one part of the deadly totality of Darth Vader’s particular technique.

RELATED: The most adored characters in STAR WARS

In Star Wars #25’s ‘Obi-Wan & Anakin: The Lession’ and ‘Darth Vader: The Lesson,’ from Charles Soule and the respective artists Ramon Rosanas and Giuseppe Camuncoli, Anakin’s training with Obi-Wan is contrasted against his training with Palpatine. Obi-Wan explains to Anakin that the lightsaber is a purposefully limited weapon, since it communicates the Jedi’s role as protectors – not destroyers – and forces them to make conscious choices in combat rather than attacking with devastating force. Years later, Palpatine duels Vader and mocks him for his reliance on the lightsaber. Palpatine argues that the lightsaber is a symbolic tool, and that the Sith’s real weapon is the Dark Side, easily defeating Vader by pummeling him with debris. Palpatine notes that the dark side touches everything, dwarfing even the most skillful blade. 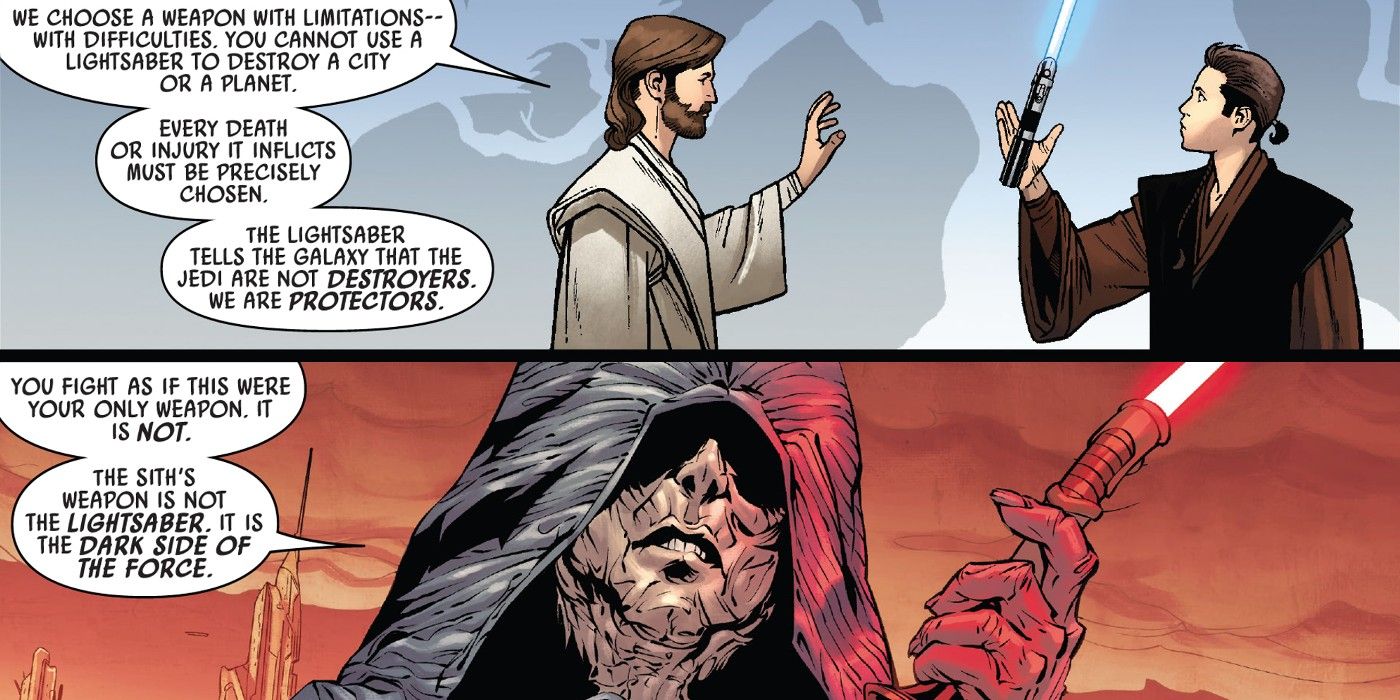 What’s fascinating isn’t just how Palpatine’s lesson runs counter to Obi-Wan’s, but how thoroughly Darth Vader took this training to heart. Vader stood alongside Palpatine as long as he did because he believed no-one could make him stronger than his cruel master, and while he may have plotted against him, he also studied Palpatine’s techniques and tactics. Star Wars #16 (from Soule, Rosanas, Rochelle Rosenberg, and Clayton Cowles) sees Luke identify Darth Vader’s use of the environment as the technique that makes him so unbeatable – the same combat philosophy that Palpatine initially used to overcome Vader himself. While Anakin listened to Obi-Wan’s lessons in the careful use of the lightsaber as a surgical tool, he ultimately embraced the Sith perspective of turning the world itself against his enemies – something which his immense influence over the Force allowed him to do better than almost anyone else in history.

Darth Vader slew many Jedi and expert Force users because he was a deadly swordsman positioned at the center of a lethal storm of his own making, but this technique required him to see the logic of both the Jedi and Sith’s combat philosophies and embrace the latter. It’s a technique that’s rarely been bested in terms of actual fighting ability, and one of the most definitive marks Palpatine left on his corrupted pupil. As Star Wars’ definitive Sith master, Darth Vader wasn’t merely more skilled or powerful than the Jedi he battled, but knowingly rejected their view of combat to reach his full, corrupted potential.